PLEASE NOTE our online business is trading as usual but our Cornwall showroom is not currently open because of Covid lockdown.
Dismiss

We’ve talked about foiling before, but in the SUP surf and surf sense. Other types of foiling are available, however. One such area is windfoiling, or windsurf hydro foiling. Basically sticking a hydro foil on a windsurfing board and hovering roughly 3ft above the water whilst (literally) flying along. We caught up with Tez Plavenieks from Windsurfing UK Magazine to find out a little more.

So what actually is windfoiling?

Windfoiling is the art of flying or hovering above the water having lifted via the mechanics of a rearward placed hydro foil. Foils look a little light RC gliders and in fact work on exactly the same principles as aeroplanes. Forward momentum induces speed which induces lift and hey presto! 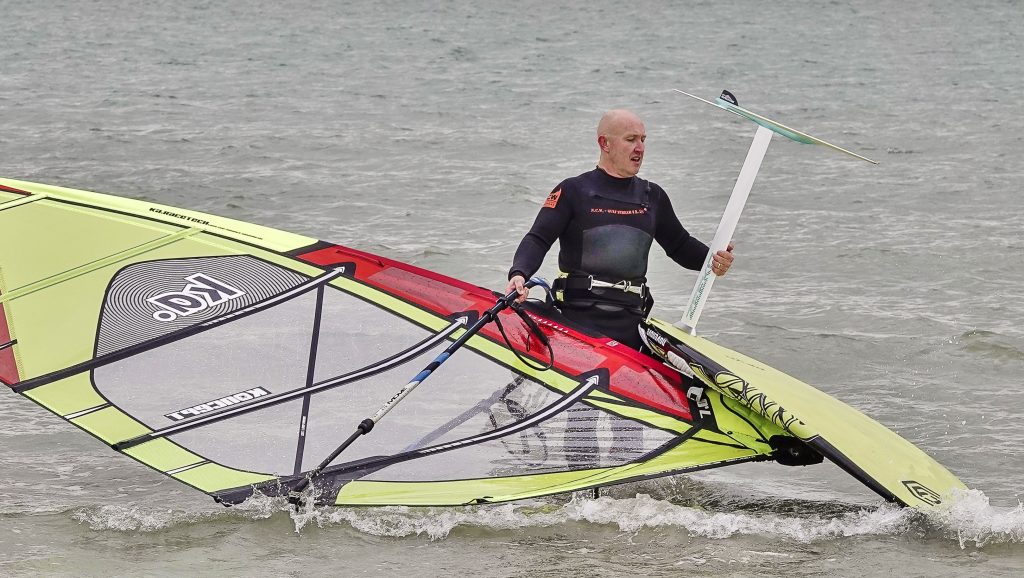 Is it hard to learn?

At the start of my windfoil journey I was using equipment that although was certainly mass market is very different to the gear available today. In just a short space of time foils themselves, windfoil specific boards and sails designed primarily with windfoiling in mind have come a long way and are even more efficient and user friendly than 12 months ago. There’s never been a better time to get involved.

It’s a strange feeling at first. Lifting itself feels odd and there’s a period of readjustment in terms of stance and technique – you don’t do quite the same things as when windsurfing in standard form. Once up on the foil everything is silent and the whole ride is frictionless. Plus you’ve got apparent wind in the sail so everything is light. It’s because of this efficiency that riders can drop at least two sail sizes when foiling. This is a huge benefit as it means smaller rigs can be used in lighter airs. There’s still a degree of technique to learn in terms of flying but the pluses can’t be denied. 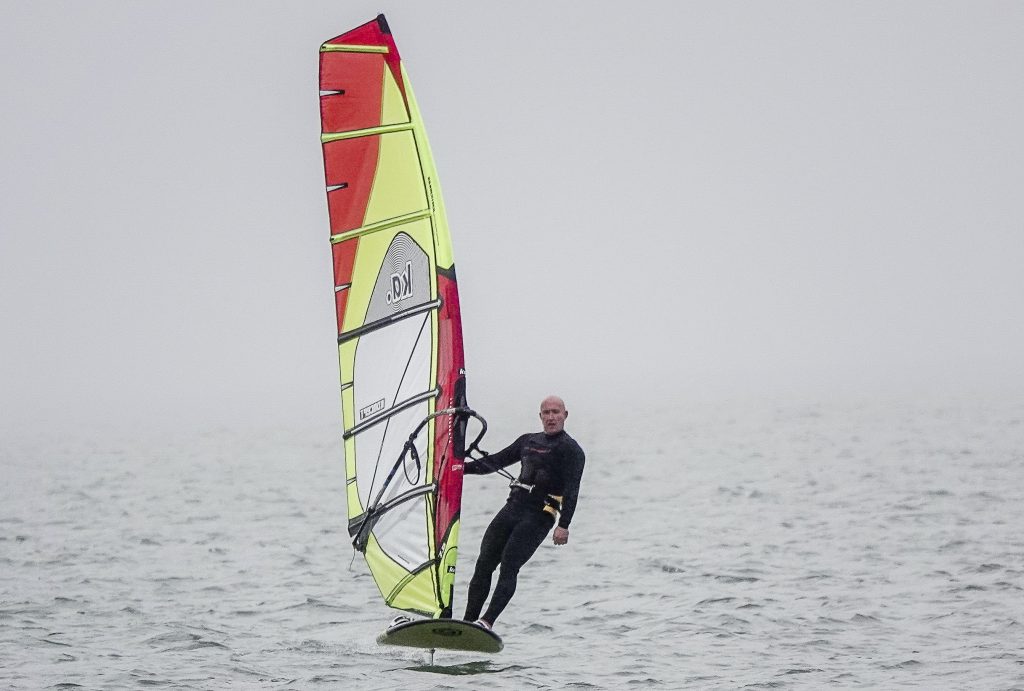 Windfoiling, at the upper echelons at least, where 100% carbon set ups are being used with interchangeable wings and foil specific boards can cost a few grand. That said, however, you can purchase a second hand board that accommodates a windsurf hydrofoil via deep tuttle fitting. As mentioned above products have improved drastically with foils not needing to be full carbon. The Zeeko Windfoil I’m using in the pics is made from anodised alloy with G10 front and back wings. It comes in at 949 Euro which is pretty respectable for a foil. Being able to do away with rigs (including mast, sail and boom) over 7.5m should free up cash for a foil and second hand board with a little coin to spare.

What’s the lowest wind speed you can foil in?

There are plenty of vids and pics online showing riders windfoiling in sub-10 knots. In some cases down to around 6. Be under no illusion that foiling in this wind band is technical and relies as much on a pan flat water states and consistency between gusts of wind as it does rider skill. For more people, in the UK at least, it’ll be a toy for use in around 12-18 knots. You can foil in higher wind, which I actually enjoy. That’s not for everyone though. 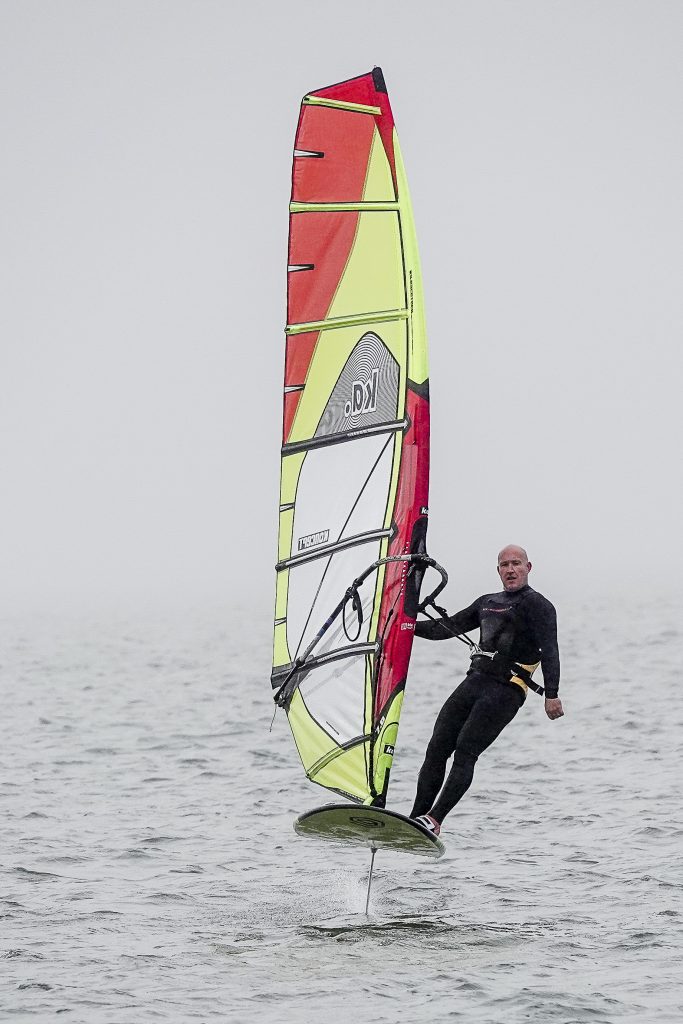 Anything final we should know about windfoiling?

It’s there, so if you haven’t tried it you should. Get along to a demo and have a go. You may decide windfoiling isn’t for you, in which case fine. But I bet you’ll love it. Also thanks to NCW for supplying me with wetsuits and assorted rubber I use when testing windsurf, windfoil, stand up paddle board and kayaking kit. Couldn’t do my job without.

For anyone looking to learn more about windfoiling, or foiling of any other description then hit this link – https://www.windfoilzone.com/tutorials

If you liked the above article then maybe check out –


Bags… We sell bags. Bags for all scenarios. Bags

#springiscoming can't you just smell it? And that

The boom room! We're not just about #watersports a

The things you find not too far from home… #kern

Justin Carr
Super fast dispatch and quality product. I will certainly but from here again and I would recommend them too.

Mike Wright
Great customer service from a family run business. Purchases arrived in good time and order. Bought 2 sizes as I was in between. Larger one fits like a glove. Decided to give the smaller one to my son as an extra Xmas present.

Robert Clyde
Very quick and reliable service, product 100% as described. Many thanks

Pamela Bennett
Amazing Company, giving amazing service. Second to none. They are extremely knowledgeable and helpful. Always available on the phone, nothing seems to be too much trouble.
Wish there were more companies with this positive attitude. I am new to cold water swimming this year( a swimming grannie) North Coast products are making this the best experience, look forward to visiting in person in the future

Claire Hester
Great service. Would highly recommend. They enabled me to water ski throughout the Winter !

John P
Recently bought a pair of the 5mm surfboots and the 1.5mm hooded thermal rash vest. I am really impressed. Went for a surf this morning in the north sea, onshore wind, 9 degree water, and now my 5/3 wetsuit feels like it’s going to last me the Winter no problems!
The boots fit really well, and you can get a good seal because they have an ankle strap and a top strap- the rash vest hood is much comfier to wear than a separate hood, and because it’s attached to the vest it means the neck can be a bit more generously cut, which helps with that weird negative pressure sensation you sometimes get when you get dunked in a really tight hood.
I would 100% order from here again- great stuff, at a really fair price point. Thanks guys!